The Australia–US Ministerial Consultations (AUSMIN) is the principal forum for bilateral consultations with the United States. Held regularly, alternating between Australia and the United States, AUSMIN brings together the Australian Ministers for Foreign Affairs and Defence with the US Secretaries of State and Defense, along with senior officials from both portfolios. The consultations provide a major opportunity to discuss and share perspectives and approaches on major global and regional political issues, and to deepen bilateral, foreign, security, and defence cooperation.

This year, Secretary of State Pompeo and Secretary of Defense Esper met with Australian Foreign Minister Marise Payne and Defence Minister Linda Reynolds on July 27 and 28 in Washington, DC as co-hosts of the 2020 Australia-U.S. Ministerial (AUSMIN) consultations at the Department of State. 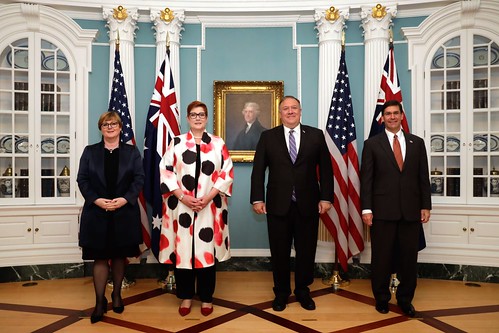 2020 marks the 30th Australia-United States Ministerial Consultations (AUSMIN). Over the past 30 years, AUSMIN has been hosted in nine cities across Australia and the United States. The last AUSMIN was held in Sydney, NSW in 2019. Minister for Foreign Affairs and Minister for Women Marise Payne and Minister for Defence Linda Reynolds hosted US Secretary of State Michael Pompeo and US Secretary of Defense Mark Esper on 4 August 2019. A list of past dates, locations and Ministers is available here AUSMIN fact sheet: dates and locations.