75th anniversary of the Battle of the Coral Sea

75th anniversary of the Battle of the Coral Sea

On 4 May 2017 the Embassy and American Australian Association were honoured to host Prime Minister Malcolm Turnbull and his wife Lucy, President Donald Trump and First Lady Melania Trump and veterans of the War in the Pacific at the gala dinner to commemorate the 75th anniversary of the Battle of the Coral Sea and the official launch of the “100 years of Mateship” campaign.

The Mateship campaign commemorates the 100th anniversary of the first time Australian and American troops fought together in WW1 and the strong bonds of friendship, camaraderie and loyalty that have tied our nations together ever since. Australia is the only nation to have fought alongside the United States in every major conflict of the last century. 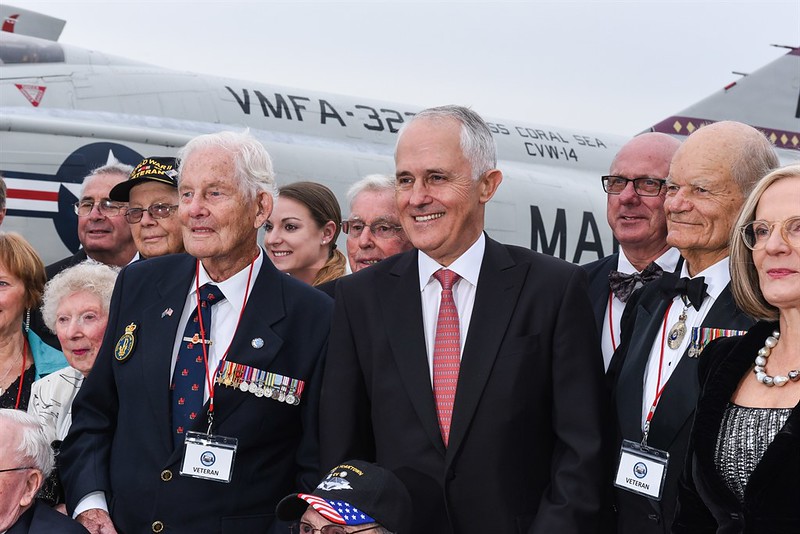 During 2017 and 2018 the “100 Years of Mateship” campaign will commemorate our shared history and celebrate the strength of the modern bilateral relationship across shared endeavours as diverse as business, trade and investment, strategic policy, science and space, technology and innovation, the arts and sport.

The evening was proudly supported by prominent Australians in the USA including Rupert Murdoch, Anthony Pratt, Greg Norman, Andrew Liveris and Frank Lowy and American supporters of the bilateral relationship including the Commander of the Pacific Command, Admiral Harry Harris and actor John Travolta.

Before the gala, the Prime Minister and President Trump met on board the USS Intrepid for their first formal bilateral meeting since the President’s inauguration. The two leaders discussed the enduring bonds, deep friendship, and close alliance between the United States and Australia that have been critically important to the maintenance of regional and global peace and security.

President Trump Gives Remarks Commemorating the 75th Anniversary of the Battle of the Coral Sea: