The Hon Joe Hockey
Australian Ambassador to the United States

Celebration of 50 Years Since the Opening of the Embassy of Australia - Washington, DC
20 June 2019

When a nation wants to be listened to in another nation, it must formulate good policy and send good people. However, an important, often overlooked factor is the right building in the right place. It represents continuity of national bonds and transcends individuals and governments. It is a place where people of both the sending nation and the host nation should know, and where they should feel at home. The embassy at Scott Circle has done Australia proud. It is now a permanent part of our history.

It wasn’t always this way. When Richard Gardner Casey arrived to found our legation in 1940, he did so at our Residence, White Oaks, up on Cleveland Avenue. Over the next almost 30 years, we went on to own two other properties whilst leasing another four. Our Chancery operations moved up and down Massachusetts Ave, until finally in 1964, and in competition with eight other countries, we secured the prime position of Scott Circle, within sight of the White House.

A ground breaking ceremony occurred in 1967 presided over by then Australian Minister for External Affairs, Paul Hasluck, and then US Secretary of State, Dean Rusk. Construction began immediately with the topping out ceremony in November 1967. That was the moment when the Australian flag was raised onsite for the first time as the final piece of steel was erected.

It was then, on this day in 1969 - June 20 - that a ceremony was held in the hall of the Embassy, inaugurating Australia’s new home in Washington DC. It was a watershed year for Australia – Rod Laver won his first US Open title, the telescope at Parkes Observatory in rural NSW beamed images of the moon landing around the world, our national opera company; Opera Australia was founded and Australia passed the Equal Pay Act. It was also the time of short wave radios, tea-to-desk services, adding machines and stenographers.

The opening was presided over by the Right Honourable Lord Casey. The Chancery was designed by Melbourne firm Bates, Smart and McCutcheon. It showcased Australian walnut timber, wool furnishings and even the armour plate automatic doors were designed and manufactured in Australia. In fact, it was the first Australian diplomatic mission to a foreign country outside of the Commonwealth to be included in the Commonwealth heritage list.

The Embassy at Scott Circle has been home to 15 Ambassadors who have led a diverse and growing team of diplomats and locally engaged staff, several of whom have been with us for many years. We currently have 54 members of staff who have each served for more than 10 years, and collectively they have dedicated over eleven hundred years of service to the Embassy.

The Embassy is also home to Australia’s largest foreign defence mission. There are over 500 Australian Defence Force personnel in the US, including those embedded in US units. Our Defence staff and operations make up a large part of the Embassy’s workforce and community activities. Congratulations to Alan Clements, Defence Attaché - Head of Australian Defence Staff and his team who are also celebrating this important milestone with a special Golden Anniversary themed Prayers – their 60 year-old gathering for defence personnel. It is one of the most loved traditions of the Australian mission here in DC.

This embassy is a relationship machine. It is home base for our operations across the country and across the America’s more broadly.

A constantly changing environment of trade, intelligence, defence, national and international security, and foreign policy concerns has meant our home, in the heart of powerful DC, has had to adapt. A Congressional Affairs branch was established in the mid 1990’s to meet the challenges of extending Australian influence to Congress and the broader American public. In this endeavour we have been assisted by local, highly skilled, American staff who continue to support our work in that area.

We also have a large team managing our corporate and property affairs. That includes every time the roof leaks, the garden beds need plating, or currently, our façade needs a little extra support. It is also the team that manages our fleet of cars, which in 1993 was praised by The Canberra Times who reported that our Embassy car pool was among the most respected in Washington DC because we pay our parking fines on time!

Our Embassy has hosted dinners, receptions, lectures and every imaginable type of meeting. Annual events have become hot tickets, including our ANZAC Day commemorations with a game of two up out the back, wine tastings, sporting watch parties and social club gatherings. We even held a party in honour of the 500 carats of pink diamonds from the Argyle Diamond Mine in Western Australia which were donated to the Smithsonian.

Cultural, academic and sporting luminaries have graced this hall including country star Keith Urban, Indy500 Champion Will Power, and Quantum physicist and 2018 Australian of the Year, Professor Michelle Simmons.

Our cultural program has showcased over 300 artists in our Embassy collection and gallery. The inaugural exhibition in 1969 presented Aboriginal artworks and objects. For many guests and visitors, this was their first experience of Indigenous Australia. A now 20 year partnership with the Kluge Ruhe Museum at the University of Virginia has seen the Embassy present over 15 major exhibitions of Indigenous art, both here at the Chancery and across the US.

Even our annual Christmas light installation has become a local fixture. Our illuminated kangaroo’s; the six white boomers, light up twitter every festive season, they have even been memorialised in an illustrated children’s book.

My Ambassadorship is coming to an end in January 2020. One of my final tasks is overseeing our transfer to a temporary Chancery on the National Geographic Campus. This is in preparation for the construction of a new Embassy building at Scott Circle. As Federal Treasurer, I had the honour of approving the government budget allocation for this project, not knowing I would go on to witness its beginnings in person.

We take our role as custodians of this national asset with humility and pride.

I urge you all to stick by us as we launch into a time of physical transition, knowing that our commitment to the bilateral relationship is as strong and enduring as ever for the next 50 years and beyond. 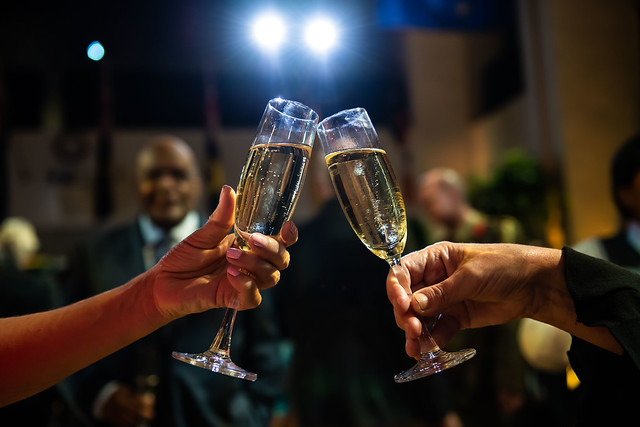