Australia and the United States relations

Prime Ministers and Presidents frequently make the long trip to each other’s shores for discussions on important matters of state. This is supplemented with regular discussions and standing arrangements between Ministers and their counterparts on areas such as defence and security, immigration and trade. These relations are further supported by Federal Ministers, state Premiers and territory Chief Ministers visiting their US state counterparts, often with accompanying business delegations.

In 2018, Australia and the United States marked a centenary of mateship — a friendship first formed in the trenches of World War I during the Battle of Hamel on 4 July 1918. The two countries maintain a strong relationship, characterised by cultural similarities and robust bilateral arrangements. Today, Australia and the US maintain a unique bilateral partnership.  While we share many cultural similarities and underlying values, there are also strong formal structures of co-operation across government, particularly in foreign policy, defence and security, intelligence, development, energy, environment, education, law, trade and investment. Central to the relationship are the ANZUS Alliance and the Australia-United States Free Trade Agreement (AUSFTA).

Australia and the United States established diplomatic relations on 8 January 1940. Following the establishment of Australian and US Legations in March and July 1940 respectively, the White House announced the elevation of the Legations to Embassy status on 9 July 1946. Australia's first Ambassador to the United States, Norman J O Makin, presented his credentials to the US Government on 11 September 1946. The first US Ambassador to Australia, Robert Butler, presented his credentials on 25 September 1946.

There has been a long standing and close relationship between Australian and United States leaders. See the extensive list of visits by Prime Ministers and Governor Generals to the United States since Federation, prepared by the US Office of the Historian, Department of State.

Recent visits to the United States

In February 2018 the Former Prime Minister of Australia, the Hon Malcolm Turnbull MP, Minister for Trade, Tourism and Investment, the Hon Steven Ciobo MP; and state Premiers and Chief Ministers attended the National Governor's Association Winter Meetings as part of the largest and most significant delegation of Australian government leaders and business leaders ever to visit the United States. The NGA Chairman, Governor Sandoval of Nevada, invited Australia to be an international partner to the NGA for the 2018 Winter meeting which reflected the close bilateral relationship between Australia and the United States, and allowed for extensive discussions across levels of government. A Memorandum of Understanding was signed at the event to further co-operation between Australian state and territory governments with their US counterparts, laying the foundation for further activity at the state level in both countries.

Former Minister for Foreign Affairs, Julie Bishop, visited the United States on a number of occasions in 2017, meeting with Vice President Mike Pence, Secretary of State Rex Tillerson, and other senior representatives of the Trump Administration.

Former Minister for Trade, Tourism and Investment, Steven Ciobo, visited the United States in June 2017 to meet the Secretary of Commerce, Wilbur Ross, in Washington DC. Mr Ciobo also visited in May 2017 to meet business representatives in Los Angeles, and in January 2017 for the G’Day USA program in New York, Austin and Los Angeles. 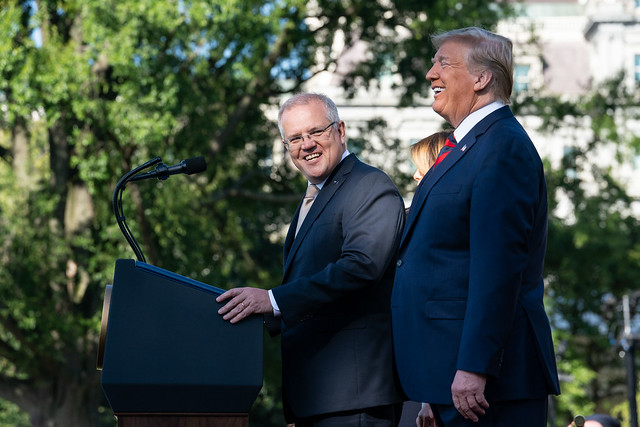 Australia and the United States